4yrs 7mths 3 wks - Blood reults christmas toothache and the most awesome news EVER!!!!

Read to the bottom - there's something you don't want to miss down there :-)


Christmas and New Year are over and done with and normality is resumed.
We had a lovely one visiting family in deepest darkest Wales and Yorkshire. There was a slight fly in the ointment with me being unable to have a drink as a result of mega strong antibiotics. I had to have an emergency dental procedure on the Friday before Christmas. I had an enormous abscess under a tooth which left me in excruciating pain and half my face looking like a hamster storing seeds for later. All sorted now though.


I had my annual MRI on Saturday afternoon at Hammersmith Hospital in London. I’m hopeful that the results will be ‘all the lights are out’ a 5th year of NEDA is my hope and if it’s not well I still have all of last years preparations to fight for a 3rd round of Lemtrada. Hammersmith were great, I arrived nearly an hour and a half early (I really hate to be late for important stuff like this) and thanks to a cancellation I was in, out and back on the bus to Paddington before the actual time of my appointment time.
I’m due to see Mr N on February 5th for my annual check-up – at 9am (AGAIN) - £48.20 to get into London at peak time but the appointment is at Charing Cross rather than St Marys – I’m having nightmares about how to get there from Paddington. There’s the London Underground and buses involved in this manoeuvre.


At a respectable time would not be too much of a challenge, but at 7:30 in the morning at the height of rush hour it is slightly more difficult to manage than Brexit or World Peace. Seriously – you can’t get a folded up child on a tube train at that time in the morning let alone a middle aged woman in a big wheelchair ……. I’ve left that with the secretaries, but seriously St Marys is round the corner and Hammersmith is on a bus route – literally anywhere else in London would be doable, but Charing Cross for 9am in a wheelchair ….. it might as well be on the moon.
My thoughts are now turning to holidays (we’re booked in Watchett again in April for Gareth’s birthday) but some friends of ours are currently in Florida ‘doing Disney’ so to speak and I’m feeling really nostalgic – not ‘do-able’ while we have Amber, we won’t leave her again because we’d never forgive ourselves if we weren’t here and something happened. In my head though …… it’s warm and sunny and I’m sipping something made of Rum and Coconuts with my feet in the pool.


Seriously I don’t get how I can be coming up to that age – in my head I’m still 27
All those promises I make to myself about losing weight, getting fit, quitting the smokes, shaving my legs more than 5 times a year (LOL) and another year has passed, I don’t smoke anywhere near as much as I used to, but apart from that there was little to no progress made in the other areas.


A New Year … to quote Yoda ….. “Do or do not. There is no try.”
I finally got my blood results for December today – mostly because my spreadsheet is on my laptop and I’ve not been at work so I didn’t bother. All terribly boring and normal as usual, I don’t even worry about the strange red ones now that the Haematology man has cleared all the scary stuff. 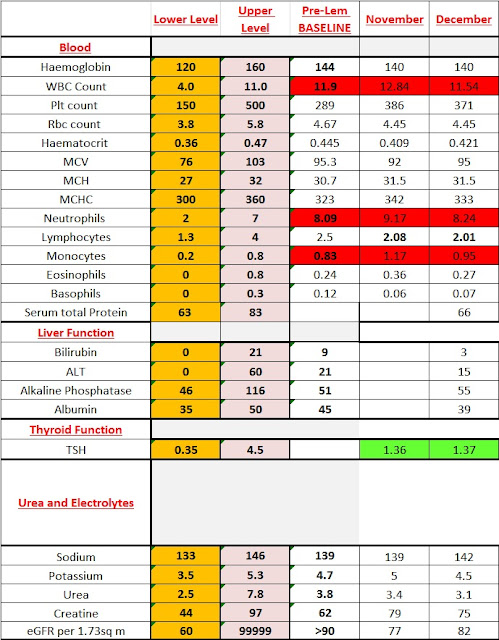 AND EDIT – I typed this up yesterday but time got away from me and I didn’t get round to publishing it. I did however make the time to drop my blood results across to my Doctor and Neurologist with a note for Mr N to say ‘see you in a few weeks’ time for MRI results’ ….. this morning I’ve had a reply from him, not a man of many words on email but that’s fine – this is enough J


the mri scan was stable
Another win for the spreadsheet and proactively making sure I keep my team up to date rather than leaving then to their own devices
at January 07, 2020