Ohhh but I’m liking this 4 day week game, it’s not sustainable throughout the year, but oh  my how nice is it to have a longer weekend. I wonder if I could get away with working 8-6 from home 2 days a week and 8-5 in the office for the other 2 days and do away with Fridays forever J
A fantasy, but an enjoyable one none the less.
So what has been going on in my world, well Hoops didn’t happen before the rainy season for Bella the dog field is a swamp and the course is cancelled until the British weather returns to being less ‘moist’
Apart from Work there’s really not been a whole lot of exciting stuff happening at all, we’re just bumbling along and enjoying life. Even our weekend visit to Costco didn’t happen this weekend just gone.
Lurking
Lots of Lurking and chilling out.
It was officially freezing this morning, properly freezing not a little bit of ice but sheets of it all over the car. The heated seats are on, the heated windscreen most appreciated (Gareth’s not so smug about his sunroof at this time of year when I can clear my windscreen and have a toasty warm bum and back with a touch of a couple of buttons)
Dog Stuff is all here, our epic life size lamp and mini Weagles have all arrived safely, Gareth thinks I possibly have more than one screw loose in my head for the number of custom dog things I order, especially after the thieving wood carving order a couple of years ago and the months of dealing with the police.
Still no big lottery win - £2.60 and a free lucky dip was somewhat smaller than I’d hoped for and certainly not going to fund my retirement plan.
I’m on a training course all week next week with work, Lean Six Sigma for 5 days straight with a big exam at the end. I’ll apologise in advance for no update next week, it’s unlikely when I get home in the evening that my thoughts will turn to updating here, I’m more likely to be snoozing until it’s time to sleep in the bed.
I had my bloods done yesterday and the results are back, I’ll pick them up on the way home and update them later on today or perhaps tomorrow. They’ve even been checked already and are ‘as normal as expected’ LOL
So here we go ‘dog art’ 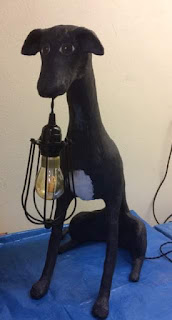 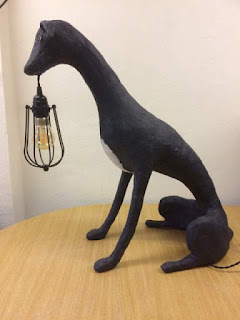 Today is ‘virtual Monday’ of my working week, I had Friday and Monday off so a lovely 4 day weekend for me.


Gareth started his new job yesterday and is no longer making claims of being ‘unemployed’ and bragging at me.
Christmas ‘planning’ has been completed with Aunty Kathy although I suspect Gareth hasn’t put the appropriate plans in place with his folks so it could all go to pieces at a later date.


Our work move to new premises is picking up speed and they’re planning a desk assessment for me which will hopefully result in my having an allocated desk at the new office which can be lowered and raised for those days when I’m using ‘Bob’ to allow me to pull up fully to my desk and not bash ‘Bob’s’ arms to pieces on the desk. (time has been spent this morning supergluing the 2 pieces on that have been bashed off in recent weeks)
Winston’s Xanax has been working pretty well on his anxiety at the fireworks being set off nightly (17 days continuous of fireworks every bloody night so far L)


The burn on my chest has now healed and the scar is pretty minimal, hopefully some sunshine next year and it will disappear completely. The bruising on my back and arse is slowly getting better although I still feel like my left butt cheek was kicked by an angry mule.
So the 4 day weeks until the end of the year


And today it’s Virtual Tuesday or Real Wednesday depending on your viewpoint. I haven’t got round to hitting post yet and I have no excuse other than ‘lazy’ I’ve really just come home and binge watched old episodes of Hawaii Five 0 with the occasional episode of MasterChef the Professionals thrown in.
After all this time and the worries with Winston and anxiety, yesterday because we were both at work I had Gareth spray an Adaptil Pheromone spray near Winston’s bed and on the blanket in Bella’s crate. Winston slept up stair in the back bedroom all day rather than by Bella’s crate and when doggy day care came, both times nobody was up and barking hysterically. I’d ordered a collar with the same stuff in it which was destined to go round Winston’s neck, but it’s now on Bella’s neck instead. We’re wondering if he’s stressing because she’s stressing and if the pheromone stuff calmed her down so he is less stressed ….

Monday - ARGH ….. my blood results have been back at my doctors since last Tuesday and they can’t seem to give them to me. When I call the surgery and ask to be put through to ‘test results’ it’s now being answered by the reception team who keep telling me ‘we don’t have the training to just read them out’ EDIT at 15:30pm – they’ve thrown in the towel, they’ve printed it all out and asked me to pick it up on the way home as ‘you’ll understand it more than we do’ LOL
On a bright note – I’ve managed a whole week without injuring myself J


The work Christmas ‘doooooo’ has been announced – a Thames river cruise event. The perfect reason for me to decline. I’m not good with going to work ‘fun’ things at the best of times, I’ll turn up for a meal and leave before anyone has too much to drink. The thought of being trapped on a boat is my idea of hell. Don’t get me wrong I have some wonderful and lovely colleagues, but I don’t like going out with work people where there is a lot of drinking involved.
Firework season is now in full effect, poor Winston is getting Xanax again for the times when the ones being set off are continuous, so Halloween, Friday, Saturday (for the late halloweeners and early bonfire nighters) then the 5th for bonfire night then next Friday and Saturday for the late bonfire nighters ….. a couple of weeks quite then the big corporate Christmas do fireworks will be going week nights for the first 2 weeks of December, another week off then new year – poor boy will be a gibbering wreck if we can’t keep him calm, as it is I just sit there hugging him to me, protecting him like a 'human thundershirt' L


It’s Thursday this is still sitting on my screen and I haven’t published it, but on a bright note I do now have my blood results – turns out they were right they make perfect sense to me and the printout was updated in a couple of minutes to my spreadsheet. After all the fuss getting them I was expecting there might be something weird … not so perfectly normal and dull with my neutrophils only a little over and my monocytes back in the normal range for the first time in a long time. Even my thyroid is behaving J
Last night was Gareth’s leaving drinks in London, an emotional affair because like me he works with some lovely people and he’s going to miss them. He finally made it home at 01:30am fairly sober all things considered (but then he did have to take the slow train from Paddington so he had a good hour and a half journey to soak some of it up) It’s going to be very different when he’s in the new role but in a good way I hope.


Gareth’s last day is Monday and then he has some time off until he starts the new job which he definitely needs, just some time to chill out and clear his head down, perhaps a visit up to his folks too.
I’ve also discovered that I have 12 days of annual leave left this year to use. I can only carry over 5 days (apparently I can also ‘sell them back’ but I’ve looked through the guidelines at work on how to do it and honestly it seems slightly more complicated and have more loop holes than world peace or Brexit so I might not bother. In the interim the other days work out nicely to only doing a 4 day week for the rest of the year J (awaiting guidance from Gareth on how I should use them)


EDIT – nuts it’s now Tuesday (again) and I still haven’t hit post for this
Weekend was quiet, work is – well – work, Gareth is now bragging up a storm about being ‘unemployed’ and he can stay in bed – Only for 4 days dearest and then you’re gainfully employed again. 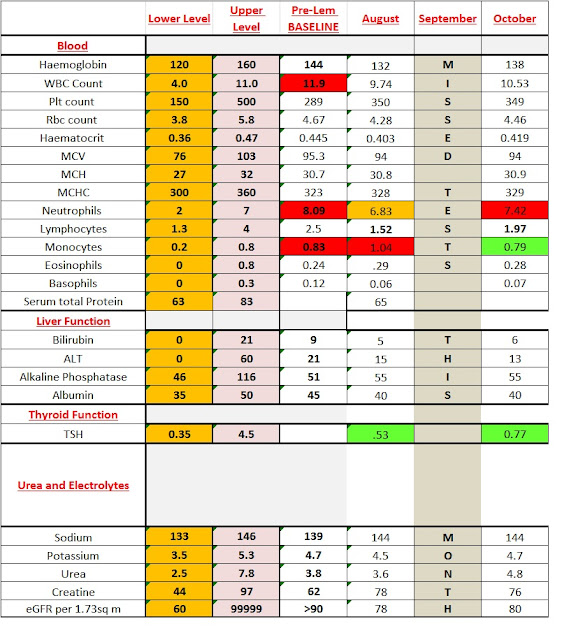