Hi all apologies for the absence, the whole face as a brake incident knocked he stuffing out of me for a while there. The minor concussion really wasn't nice and I had some interesting cuts and swelling.

All systems normal again here at Casa Doust, too many beasties, the weather has now cheered up, we had a 3 day mini heatwave last week which had me breaking out the summer dresses and my walks with the pups are so much less muddy now the ground has all dried up.

Gareth and I last night went to Pilates together for the first time and it was actually really good, very relaxing and I'm not busted today as a result of it which is a relief. I did discover that my core isn't in bad shape, my legs not too bad overall either, but my arms apparently are not quite as weak as new born kittens but they certainly aren't as strong as I'd thought they were so that's going to get some attention.

I made my first Wholemeal SourDough bread this week from scratch - I can honestly say it was an unmitigated disaster, it didn't rise properly, the air bubbles were tiny, quite doughy in the middle and worst of all tasted very much of the starter rather than the nice gentle taste. It went straight in the bin. I will have another crack at it later following the strict guidelines of the lovely Hugh Fernley-Wittingstall to make a white one and see if I can manage to not arse that up.

It was Gareth's birthday last week (not an excuse for not having posted for 3 weeks) we went for a lovely meal at L'Ortolan down the road from us as part of the celebrations of him now only being 7 years younger than me for the next 43 weeks.

Bella-Puppy-Dog has settled in well, she's house trained and apart from some minor cat bothering she's the perfect addition to the family. Craig the most awesome trainer in the UK is coming up next Wednesday to do a little work with us on being calm (and not cat bothering) I'm also hoping that given the timing we've planned that perhaps a little refresher for Winston might be on the cards as The Postman (also known as Armageddon) should arrive at approximately 30 minutes after Craig does.

All in all life is awesome, the MonSter is in hiding, I'm happy and relaxed and loving it.

Yup I did what the title says


NOTE : I do NOT recommend doing this

I did a 'klutzy' - I slipped on mud in the dog walking park whilst trying to hold Winston-Dog and Bella-Pups collars. Logistically because I was bending forwards already the slip them pitched me forwards, heading face first towards a fence post.

It's amazing the speed thoughts go through your head in this situation, they all seem to happen at once
In reality all of the above actually took about 30-45 seconds

I have a concussion, some interesting cuts and scrapes to my face, some swelling and surprisingly less bruising than we originally anticipated thanks to what I'm referring to as my lightening fast 'Ninja Skills' and the well timed face plant. I'm pretty sure if my face had hit that post at the angle it hit the ground I'd have shattered my cheekbone, eye socket and probably my jaw .... so all things considered it comes under my 'reasons to be cheerful' header - I'm cheerful that's all it is.

In a puppy chewing frenzy Bella-Pup has decided to gnaw on one of the windowsills in the new kitchen extension (not a conservatory anymore) - she seems as unimpressed with my threats that I will casserole her with onions and garlic as all the other beasts in the house are when I make this threat. So Bitter Apple spray it is for a while then some hard work with sandpaper and repainting when she's grown out of the phase.

Blood test was done last week, results are below for your enjoyment. Thyroid is still 'funky' but I'm taking my one a day for that and apart from that it's all systems are 'normal' which is a lovely way to be. 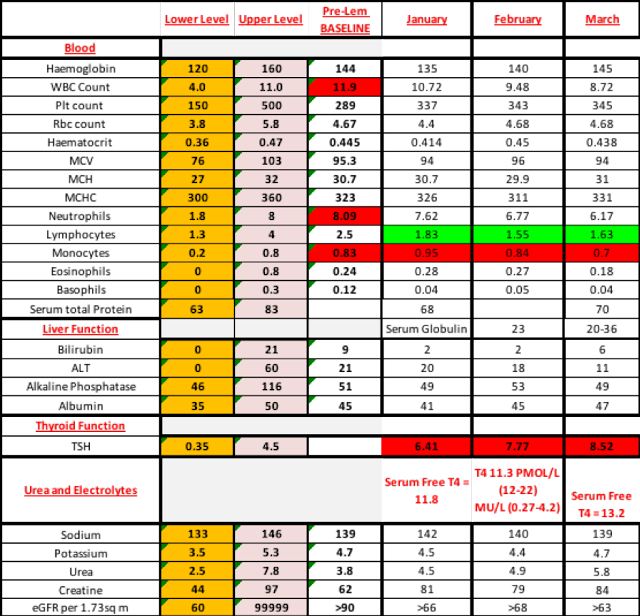