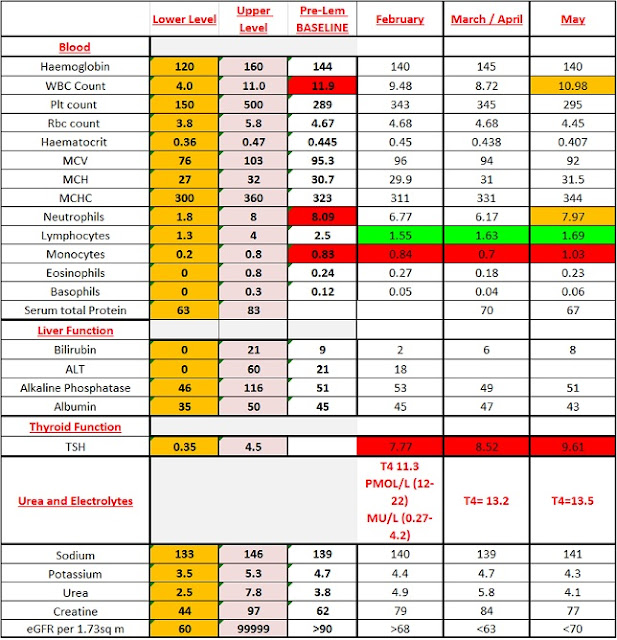 3 years as a Lemmie - Happy 3rd Re-Birthday to me

3 years ago today I went in for Day 1 Round 1 - I class this as my Re-Birthday as it was the start of taking back control of my life again.

So as promised here is the Previously on TLJ recap

What I had before that I now Do NOT have :

What I did not have then that I do have now :

If I'm honest whilst its a pain in the arse (not literally) given that 3 years ago today I was losing my sight, I was walking with sticks. Trying not to wet myself and all that other fun MS stuff. It's such a small price to pay.
A little thyroid tablet and some funky new vitamins and it's all stabilised now and while I'm not dancing at this one, but I'm happy that if this is the swap for MS then so be it.

Apologies, I'm repeating myself again, but the last 3 years have flown by so very fast. So much has happened, a lot of it awesome and amazing and some losses which have been heartbreaking and broken me into a million pieces. The love and support from Gareth, my Aunt Kathy, Gareth's Family, our friends and those that I have met online, talked to by phone, met in real life or just exchanged emails with has been incredible - I don't know what I would have done without everyone.

EDIT - I've just realised reading that back it looks like I'm planning to stop waffling at you good readers - I'm not - I said I'd keep this going for the long term no matter what and I meant it,

I've been for my monthly bloods this morning, so that's 3 years out of 5 for my monthly stabbings done and dusted too. Results will be published early next week, you never know perhaps the thyroid will have decided to behave itself.

So roll on Monday, blood work back, a new job to get stuck into weigh in Tuesday morning to see how much weight I've shifted doing Tom Kerridge's Dopamine diet - 5 lbs last week was a good start but there's a lot more to go.

The sun is shining, it's a beautiful day and the future is bright, I'm off out to walk the dogs at K9 in the sunshine and then BBQ'ing some lovely Wagyu Burgers for our dinner. I may even indulge in a cheeky G&T tonight as a nightcap.

Before I go, if you're looking for more awesome MS Warrior stories please take a look at Claire's story - a very funny and down to earth lady who likes a glass of wine


I feel like I should throw an online party, or bake a cake or something, but tomorrow it is my last day in year 2 - it will be 3 years since the start of my Lemtrada adventure.

My apologies for not being more active for the last few weeks, there have been some big changes in our world.

The puppy has settled in well and grown in confidence. Sadly this has also come with a side order of 'cat bothering' which we are working to control - fortunately on Bella-Dog's side it's all play and no malice and BamBam-cat is too chilled to really take a swipe at her.

We've had some time at the allotment checking out the national surplus of onions, garlic, strawberries and rhubarb (not all bound for the same dish).

Gareth and I are both on Tom Kerridge's Dopamine diet (low carb) together and have both lost 7lb's and the wine consumption in our house has dwindled to nothing.

And last but not least - I'm starting a new Job on Monday. Back in the Telecoms world that I love so much. I'm really excited about what's to come, I've worked there before, it's not a completely new an intimidating place because I know people there already. The work is going to be 'transformational' to say the least and inspirational too I think (no I'm not typing that because I think they might be reading - but it you are 'heya - see you Monday')

We've had a few weeks of pretty solid sunshine here in the UK which has been such a lovely thing. The Costa-Del-Berkshire is a lovely place to visit right now, bring a picnic, a hat and some high factor sun cream because you're going to need it.

So after a long silence, I'm so sorry this is a short and rubbish update, but I'll post again tomorrow for my online Lem-Birthday Party