Amber did have another stroke in the early hours of last Thursday morning, this one has been a big one and she has spent the weekend trying to learn how to walk again. It’s taking longer this time for her to pull out of it. After wondering what we would do over the weekend it turned out that it was mostly about the dogs. It was Saturday afternoon before we saw her wonderful Beagle smile again. It’s so hard to watch but she’s recovered from the others so we have to give her time and as long as she is happy then we will keep going. It’s that open how long is too long thing though.


Gareth has spent the weekend making loafs of bread. We had an ‘accidental loaf’ last week when making pizza dough, I think Gareth accidentally made the ‘Serves 12’ quantity so he shaped the leftovers into a loaf and threw it in the oven. Out popped a perfectly formed, beautiful loaf …….. And it was an accident. This prompted 2 further ‘deliberate loafs’ and predictably they were again perfectly formed, perfectly baked and delicious …….
I have a ‘patchy’ history with bread making there has been a single lovely focaccia and quite a few okay ones as well as some absolutely disastrous sour dough attempts. I don’t include things like Wheaten Bread or Soda Farls in my bread disasters they are nice and straight forward and I can make them well (although I now suspect Gareth might make them far better than I can). Gareth’s adventures in bread making for next weekend are already planned and I’ve already started ribbing him about him applying for Great British Bake Off next year.


I feel no anxiety that he is great at baking and I am crap at it, the results are lovely and tasty and doing bugger all to help with me losing some chub and get into better shape. I’ve always said if we could apply as a couple we’d make a half decent MasterChef contestant.
We also did a lot of what I call ‘adulting’ – that grown up responsible thing, cleaning the house, vanquishing the laundry basket, mowing the grass and stuff. Being this organised doesn’t come naturally to either of us. We’re both pretty resistant to being grown up so it takes quite a bit of effort to motivate ourselves into behaviours like this and it’s usually a pretty grim experience where we’re doing it because we have to not because we want to and it makes us both grumpy. This weekend we did what we needed to and it was okay especially when I called time on ‘Adulting’ and said it was time to stop.


(Side note – for me, Adulting doesn’t include cooking – Sunday dinner of Roast Chicken with potato broad beans and gravy was absolutely epic and not a ‘chore’ at all it was enjoyable and resulted in an awesome meal)
We have a friends birthday coming up this weekend, an introduction to the local Polish community and food which we are very much looking forward to, and there is a Gin and Rum Festival in Reading on Friday which I’m trying to convince Gareth he should drop me off at and come and pick me up later (he thinks I’m joking but I’m taking his ‘yeah alright’ response as agreement that he’s providing a gin and rum drinkers taxi serviceJ)


One last thing, the dog training, it’s working ….. it’s such a short amount of time, but we’re seeing improvement and more confidence from Winston. He’s not reacting to things as much and he’s just relaxing. Odd to think that loving him so much and wanting to be affectionate all the time is actually viewed as weakness by him and make him think he needs to be in charge. The book is by the trainer Nigel Reed if it will help, I’m listening to the Audible version. There’s a pretty extensive YouTube archive of him that shows how he trains.
Ohhhh ohhh and anotherone last thing ….. if you like Gin you have to try Aber Falls ……. The Welsh are getting seriously good at making some very fine spirits and Liquers. I’m blaming Amazon Treasure Truck for this recommendation – I got text last week with the Orange Marmalade was on offer. Gareth was working from home so he ordered and collected it later that day. Oh my …… a small glass, an ice cube and I was in heaven. I then discovered that they also do a salted toffee and a coffee and chocolate so it would have been rude not to taste test them. They’re lovely, just an ice cube with them for me, they don’t need more although I’m sure if you wanted to they’d be lovely.

The morning after the weeks before


This week has felt really strange, after the stress and worry of the possibility of bad things, the relief of the bad things being counted out, holiday and countless other minor things I’ve felt a little directionless as to what I should be doing.
If I’m not fighting something, organising something or avoiding something, well what should I actually be doing? The possibilities are endless and randomly my mind is blank apart from the little voice in my head saying ‘there’s a pile of clean laundry at home that needs to be put away’ ….. Hardly exciting is it?


It’s mid week, the weekend is coming and again there’s a blank space, nothing planned, just a space where ‘stuff’ can happen but I genuinely have no idea what ‘stuff’ that will be and no ideas as to what I even want to do. There are some blocks to what is feasible while we are still working with Winston on his insecurity, but we are actually getting somewhere with that now. Gareth and I are both applying some good practice to our interactions with all the dogs and it seems to be paying dividends quickly.
So I guess that’s the weekend plan – going over repeatedly the lessons with the dogs reinforcing over and over again the lessons that need to be learnt. I’m sure by the end of the weekend we’re going to be quite mad but the dogs I’m sure will be much happy with their humans. I’ll update on that as we go.


It’s also getting to that stage where I should probably start thinking about the ‘C’ word – not the bad health one, Christmas ….. good grief how on earth did it get round to even close to that time of year again. I’ve said it before but goodness knows time seems to speed up the older you get, birthdays and Christmas’s feel like they happen so much closer together.
I guess it doesn’t help that having been so crap at planning in the past I’m trying harder to be less crap by starting the preparation earlier, this is adding to the ‘things coming around faster’ feeling because I’m ‘getting into it’ sooner. I’m really not helping myself am I LOL


Amber couldn’t get up this morning, she had stronger tremors that she’s had recently and couldn’t get up. Gareth had to get up and carry her down the stairs. By the time she was downstairs she seemed to have got herself together and wobbled off down the garden to get things done. I’ll keep an eye on her and see how she does, but it’s always there in my head that her time seems to be getting short. This is probably reinforced by having overheard our neighbour find one of their rabbits had passed away in the hutch during the day – simply awful to hear how heartbroken they were and the little voice in my head saying ‘you’re next’.
Perhaps that’s another reason why I feel a little directionless right now – I’m waiting for the hammer to fall. It seems like a long time since there’s been nothing to do except just live my life and without something to focus on perhaps I just genuinely don’t have a clue how to just ‘do’ life these days.


That sounds quite depressing, but honestly it isn’t that way at all. I’m enjoying life and love and happiness.  Bob’s in the car, his battery has been flat since last weekend and I haven’t needed him for anything I’ve wanted to do. That the training is paying dividends is rewarding and it gives me hope that we can have the dogs out with us for more positive experiences and worry less when we want to go out. Gareth and I are enjoying our time together and it’s stress free and happy. I’m looking forward to the end of the year and seeing our family and catching up with everyone and hoping that I get gift choices right for everyone and that we have a lovely time together.
Perhaps it’s just that I’m not used to normal anymore and need to learn how to do ‘normal’ again.


I’m not always focused on how to ‘live my MS life’ anymore. Yes I have MS, that’s not going to change any time soon and although I wish there was a magic ‘fix it’ button it doesn’t dictate things these days so it’s not overly intrusive. It isn’t ‘me’ though.
Its getting harder to update the blog simply because there’s no MS news, it just is …… I feel like this has become a strange online  diary of a person who happens to have MS and less helpful for people reading it. I wonder what I’m actually contributing these days other than an enormous feeling of wellbeing to those reading that at least their lives aren’t as mundane as mine is and genuinely wonder why people read it (unless it’s helping with insomnia on which case enjoy your snooze because this one is quite likely to send you into  a deep sleep)


Anyway in other news …. Monthly bloods have reflected something that Dr N pointed out to me about those blood results being too high. Both he and my GP had said that the root cause could be related to smoking. His blood results and my most recent monthly ones both show an improvement pattern which reflects their comments. Having not smoked (much) before tests one of the readings has dropped (barely) into the normal range and the other is coming back inline. My thyroid has dropped into the low end, but I suspect that might have something to do with missing  dose of meds while I was on holiday – it only takes one missed dose for it to nosedive and 2-3 weeks to get it back to where it should be.
So here we go a little later than normal because I was away, here are my August results. 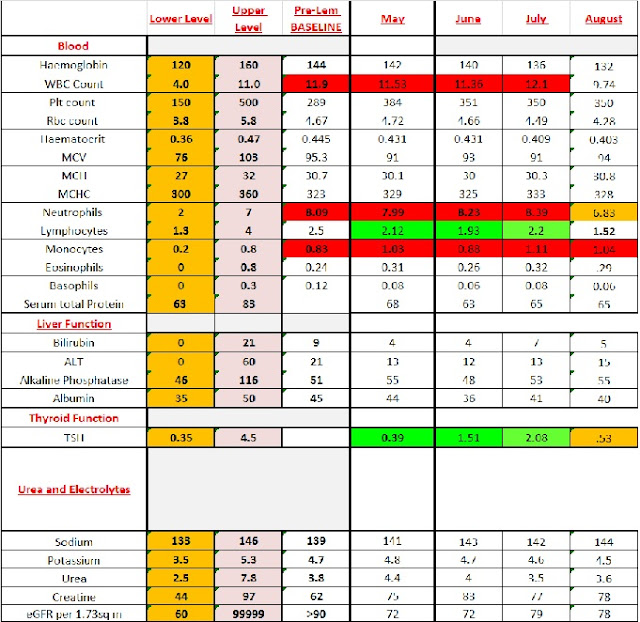