The morning after the night (weekend) before


After Friday’s excitement, getting cold and wet, lost train tickets, taxis and lovely policemen, the news that I’ve achieved Lemtrada Gamer Level 4 Year Long Term Warrior. You would think the next thing I had on my ‘to do list’ would be to have a celebration and relax a little. Sadly this wasn’t the case, I got home just in time to start ‘implementation weekend’ for my project. This was a deployment which spanned a 24 hour period with key checkpoints at 7:30pm, 11:30pm, 04:00am, 07:30am, 11am, 14:30pm ……..


Needless to say I’m pretty broken. It’s going to take me about a week just to get my sleep back to a normal level and make this right again.


I’m pretty sure my thyroid going haywire again really isn’t helping matters; it really does completely flatten me when it’s misbehaving in a way MS never managed to.


In terms of life the world and everything, well the last couple of weeks has been a deluge of work and not much else, it’s existence and a never ending battle to keep ahead of the avalanche leaving no room for other stuff.


I’m not drowning, but I’m sure as heck not making much progress, treading water at best really. The fundamental thing is that’s good news – MS not getting worse is great, I just feel like I need to have something getting better as opposed to not getting worse if that makes sense. I just want it to be more


Its Valentine ’s Day today and we have a lovely meal planned at home along with a bottle of bubbly. Just a night on the sofa, cuddled up with a film; sounds about perfect to me. (Logistics of this with 3 dogs who also want to cuddle certainly doesn’t help with the romantic mood J)


Monday night went with a bang (not in a valentines type way) I lost my balance trying to rearrange the dogs on the sofa and went backwards over the coffee table. I neatly stopped my descent to the ground by using my head and right shoulder as a brake. OUCHIES …… I can’t lift my right arm without yelping like a baby and the banging in my head hasn’t stopped since. There’s a good chance I have a low grade concussion, but it’s not really stopping me doing much except I don’t seem to be able to remember what day of the week it is.
Oh and PS - I've just come back from a visit to my doctors appointment this afternoon - after the afternoon in an ambulance, heart worries which turned out to not be heart problems at all and the 'Do you know you have high blood pressure madam' converstion - apparently it's being in the back of n ambulance which raises my blood pressure because ouside one there's nothing wrong with it at all.

All of a sudden I feel like I've acomplished something - I've beaten my none existant blood preasure problem, I've a new specialist to house train ....

I think that calls for a celebratory G&T

3 years and 35 weeks already. Sorry for not posting last week, Amber-Dog was incredibly poorly, an emergency vet trip last Monday night because she was throwing up and having problems breathing, X-Rays, ultrasounds bloods and medication, then 3 days in our own vets on a drip with pain killers. There is a £1,404 bill for the week for what basically seems to be a hugely expensive bout of doggy gastroenteritis. We got her home from the vets on Thursday (she was back to her vocal demanding food and insisting everyone pay attention to her) and life returned to normal.

Friday Gareths parents arrived for the weekend along with the snow, it took them ages to get here and as usual the route off the M3 and through Basingstoke made the national news for it's simple inability to actually manage a little snow with any dignity at all.

This week has been completely nuts at work, the lead up to a big deployment weekend at work. I've been in at 8am and still online at 10-11pm at night. I suspect I'll be paying for that next week when my body decides to make me slow down.

I've been into London today, and met with Dr N, apparently good news needs to be shared quickly under Berkshire and London NHS

Lemtrada is still doing its job, everything I hoped and dreamed it would do. Yes my thyroid has gone a bit tit's up (more about that with the bloods) and sometimes I need Bob for the things that require significantly more stamina than I currently have. But I'm not collecting scar tissue in my brain and spine like some collect shoes or tattoos and I'm not collecting a load of new symptoms. So YAY BLOODY YAY.

Something Dr N also said is that I'm approved for a 3rd round if I ever need it, so I don't need to fight for it. All that time doing the cost benefit analysis of it to show for me it really has been a cost effective investment for the NHS, and the risk assessment of alternative types of treatment and their suitability can happily get put away. It's lovely and reassuring to know that I would not have to do battle to get a 3rd round should that ever be the day.

While I'm waxing lyrical about the NHS, I should also give a huge shout out that I can't find a single negative about being under Berkshire (apart from having to use public transport to get there) The efficiency and professional way they manage your appointments, the not sitting around for hours and the setting up of your next MRI’s and appointments pretty much before you even get home from the one you’ve just been to.

It’s Friday night, the first phase is going well with the deployment and the next update call is at 4am so I’m going to go and hit the sack shortly.

And last but not least – blood tests, I had a call from the Doctors this week – I’ve been asked to reduce my Levothyroxine from 150mg a day to 125mg … it would appear that it might have been a little much as I’m now showing hypo on my blood results (sadly I haven’t suddenly become a svelte size 10 (UK) size)

After getting thoroughly soaked about 8 times getting into Hammersmith to Charing Cross and back, losing my train ticket between Paddington and the hospital, spending £60 on trains and taxis, accidentally spending £14 to buy a coffee in  ‘cup for life’.

Well I’ve had the biggest smile on my face, this is the best news I’ve had in ages, add to that apparently it’s far more convenient to put Bob and I in at the front of the train so I’ve had 1st class upgrades going both ways.

Today has been a bloody good day and I’m a very happy girl. 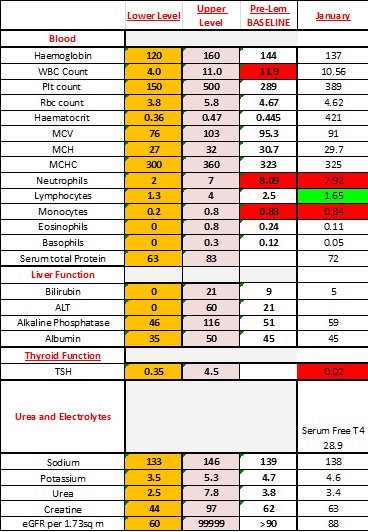