The week after my last post became quiet and serene and much more sensible. (well as sensible as it gets in my world around a full-time job, the demands of the pets and of course my husband.


I saw my Doctor on Thursday and picked up prescriptions for some bits and bats that were running low, I also asked to be referred to a new Neurologist within the Berkshire team (I gave him the name of the one that I wanted to be referred to). After that the lovely Ron and a few more holes in me from the acupuncture needles to work on the Psoas muscle (next session is hopefully the last one as I’m pretty much mended now). Friday was ‘stabbing day’ and the one stab wonder Phlebotomist did her usual fantastic job at harvesting my blood, although despite sitting on the loo for an exceedingly long time I failed to pee and have yet to drop in a ‘sample’ to be sent off.


The weekend really was a whole lot of not doing much, a quick trip to get gassed at BMSTC Saturday lunch time and the weekly food shop and when a whole lot of just loafing around reading books and binge watching Blacklist, dog walks and recreating James Martins Shin of Beef Stew with dumplings – which was pretty epic if I do say so myself 😊


A couple of days in the office and tomorrow I’m off on the train to Manchester for a day trip. Apart from the odd trip into London with Gareth which doesn’t really count, I think its been 5 years since I took a proper train journey. £172 for a return journey is absolute bloody daylight robbery in my opinion – especially when it doesn’t involve anything to eat or drink and WiFi is an extra fee on top – absolute thievery – and also why public transport is never a preferred method of travel in the UK – it is just far too cost prohibitive. I could rent a hire car, fill it with fuel and book a night in a hotel for less than that ☹


I’ll step right down off that soap box …


Poor Gareth gets the wonderful job of dropping me at the station for 06:00 tomorrow – he says he’s texted me to say he’s very excited about this – it’s amazing how text can convey such deep and damning sarcasm 😊


Ohh back to trains (briefly – I promise) by the power of Facebook it’s exactly 2 years today since I used a train – Gareth and I went into London to see Hangmen at the theatre and had the most amazing meal at Steak & Co before the show – we absolutely need to do this again soon.


So coming up …. Well lots of lovely plan free weekends that I can fill with loveliness, like a long weekend in Normandy, the afore mentioned trip into the city for lovely stone cooked steaks. I really just need to get round to sorting that out – and therein lies the problem when it comes to actually making plans like this the project manager disappears and the flaky bint replaces her, I forget (not MS just middle age blondeness) and things just don’t seem to get planned.


And for your enjoyment here we go January blood results - time to check up on the scores on the doors that become so important to us all. TSH came back late and the doctors have the results but they're not allowed to read them down the phone to me until a doctor I've never seen has reviewed them LOL .... mini update tomorrow too I guess 😊 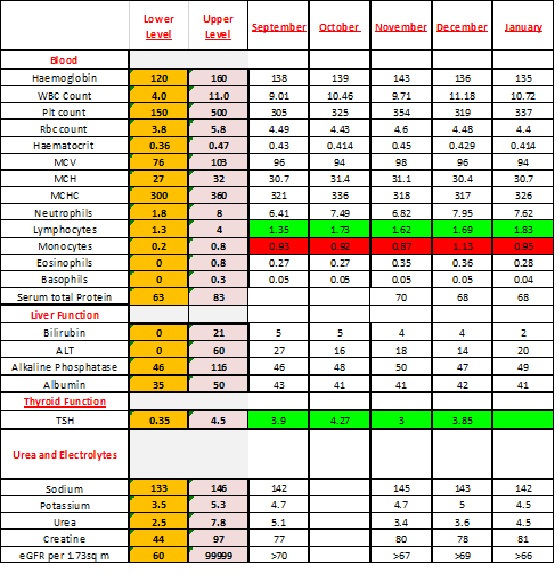