Year 5 - here we go again, a review of changes and month 49 blood results


My Facebook feed for the last week has been full of updates from treatment week and then from round 2 a year later. It really does seem very bizarre that it was so long ago because in my head it’s seems like it was only a short time ago. So much has happened, but by the same logic in terms of my MS – well nothing has happened.
I’m now a 4 whole years NEDA – No Evidence Disease Activity. It’s exactly what I hoped for when I chose to have Lemtrada I wanted to stop the MS in its tracks and I did.


I guess it’s time for a bit of a recap really a ‘then and now’ of how things are going, please excuse the lazy copy and paste from 4 years ago for the ‘then’ part, but as I said from the start this was my way of keeping myself honest, and check I'm not remembering stuff with rose tinted glasses and to present a realistic view of how things are.
[INSERTED COPY AND PASTE]


What I had before that I now Do NOT have :
All things considered, this is all going according to plan, the thyroid problems whilst unwelcome were a known side effect and not unexpected. - MS wise things are going to plan.
Life and stuff for the last week have been good. The ‘spine guy’ as released me from treatment, the injection to the nerve cluster may take many months to show any result and it’s a just wait and see scenario. I’m now released from the Eye clinic, infection has gone completely and whilst the scarring in my left eye has left a ‘fuzzy bit’ (think looking through a bit of frosted bathroom glass) I can see light and shade through that bit so it’s not as bad as originally thought to be.


I’m picking up my new ‘seeing’ glasses this Saturday so I can get rid of these awful black framed things I’m currently wearing and replace them with the much prettier new prescription ones.
Gareth is planning a short trip ‘oop norf’ this weekend to go and see the last day of his friends ‘Hallilapse’ show. Given the recent issues with Winston and his anxiety I’m going to stay home with the dogs and just relax. This does mean that since it’s yet another bank holiday weekend here in the UK, I can add a couple of days wrapper around the weekend and have a 5 day break, with Gareth and I still getting a ‘weekend’ together just a little later than normal – the caveat for this is that Gareth can get leave approved – bit pointless me booking it if he can’t really.


Saturday night was good fun, we had company and watched the Eurovision song contest. Not a huge ‘drink-fest’ although we did have a go at the drinking game. I love that Iceland always sends artists who enjoy the opportunity to shout at the rest of Europe, the yodelling Australians on windscreen wipers were very strange and as always the UK entry was just disappointing. Madonna is neither aging well; or gracefully and her dancers with their ‘mini-protest’ went largely unnoticed.

EDIT - for those readers in Norway, rather liked your entrant, although the guy with the bald head reminded me a lot of the singer from Right Said Fred - I kept expecting him to sing 'I'm too sexy' every time the camera moved to him :-) cc
This week looms one more with plans afoot. Tuesday is a night out at a new start up holiday business that a friend of ours is running - that can only be traumatic for the savings account. Wednesday a night out with Terry for a meal and catch up. I should probably do the work thing too - unless the Euromillions comes up trumps (not Donald) tomorrow night. New glasses on Saturday, then the weekend when Gareth gets home (see previous caveat).


Not quite the glamourous and hectic lifestyle we’d like, but then we also have to consider Winston and his anxiety into the equation. He’s getting there, a little better each time but he’s got a long way to go. Amber is better each day, still wobbly but better.
All things considered, life in the Doust world is pretty awesome really, the sun is shining and life is good.


So here we go with the start of year 5 post Lemtrada continuing to kick arse and take numbers.
Last Friday’s blood results for your enjoyment – As usual there are some misbehaves and some wins. Lymphocytes are satisfactorily low, Thyroid is still within the normal range (barely) 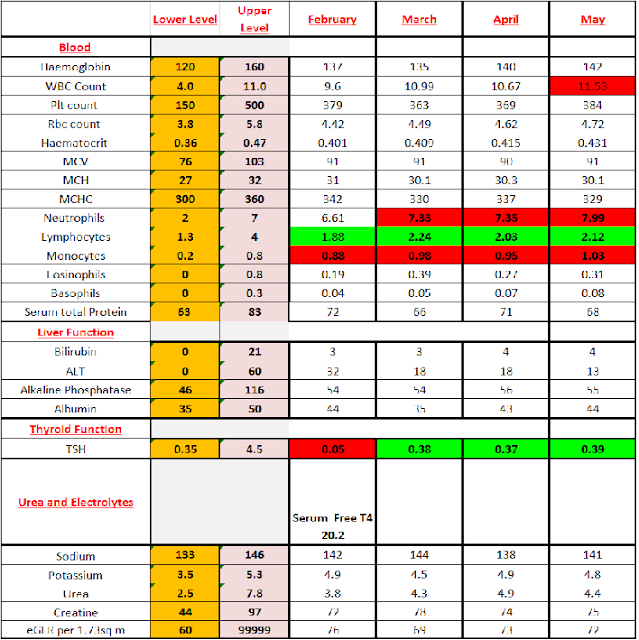