3yrs 6 wks - I have a NORMAL THYROID reading WOOHOO


British people are insanely picky and like to moan about the weather (it’s almost an national hobby we whinge about it so much)
I’m not having a whinge, just loving that we are having ‘Summer’ like the rest of the world does for a change. Like our British reaction to 5 flakes of snow in winter though, we are woefully unprepared to meet what seems to be an ‘extreme weather event’ J

When I say woefully unprepared, in our case this means the aircon unit is currently buried in the back of our garden shed behind a multitude of things which have been relegated from our home, but are not quite at disposal status. The duvet is now in the bottom of the wardrobe, we are sleeping under a duvet cover only and to be fair if it weren’t for the night monsters which attack the bits that are uncovered – well that would be gone too.

Dinner on Saturday was lovely, so great to catch up with our friends. The ribs I’m doing for their summer get together were received very well as the starter and blessed as perfect for the summer do. Two tomahawks proved to be complete overkill – we didn’t even finish one between the 4 of us – they’re off to fill their freezer with them this week. The Lemon Curd and Limoncello individual cheesecakes to round off the meal went down like feeding time at the zoo …. Sixpence to watch the lions feed (after the meat coma that preceded it, that we had room left for anything was nothing short of miraculous)

Sadly 12:00 walkies for the pups at K9 on Sunday couldn’t happen, it was simply too warm and with the limited shade and risk of them running too much in the heat and making themselves poorly – risk assessment said NO.

We went and collected BamBam’s ashes on Sunday, very bizarre to receive him in the same floral tube that we got my brother in (a considerably smaller one – but the same type regardless) We aren’t sure where to put him if I’m honest, we can’t bury him in the garden for fear that the dogs would dig him back up. Perhaps scatter him around the front and the garden (probably freak out the neighbours). For now he’s sitting on the top of the bookcase while we mull over our options.

Randomly after many calls and much faffing around to get my Thyroid results for June the receptionist at the surgery read it down the phone to me when I was trying to book an appointment to have it done again ….. 2.19 – that’s back in the NORMAL RANGE WOOHOO I think – I hope OMFG that’s awesome news 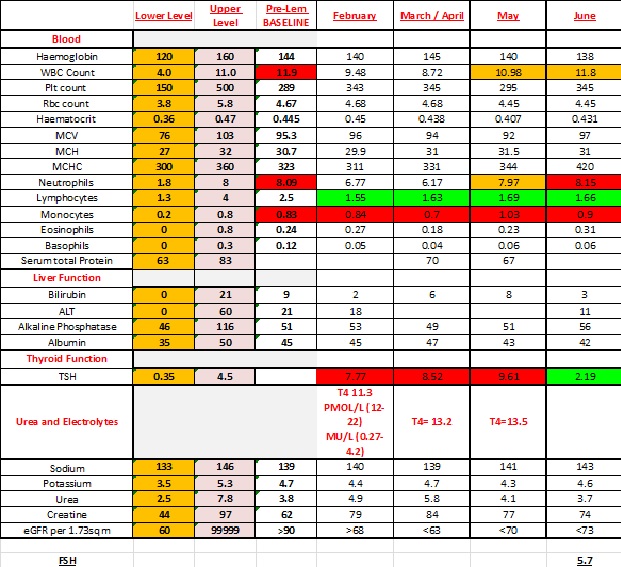 I also really do need to understand more what an FSH (menopause reading) of 5.7 means – a quick google search of said levels seemed to imply I might be going through puberty J (which at 46 would be somewhat bizarre – and I remember the breakouts and the spots from last time, and goodness knows my boobs getting even larger would be nothing short of catastrophic – EEEK L) Low FSH also (according to Dr Google) can also imply problems with the pituitary gland or hypothalamus (interestingly pituitary gland problems apparently can also contribute towards HypoThyroid – according to Dr Google) I guess it depends how much you want to furtle around under the hood of that one – but the lack of ability to conceive throughout my life certainly gives a little gravitas towards the Pituitary being on the frisk. That’s one for a long in depth conversation with Dr B I think.
So apart from the worst hangover in living memory on Sunday (less said the better about that) the week has been entirely lovely and normal
Stay well xxx
at July 03, 2018