So here they are the scores on the doors for my 'half way through the blood tests' anniversary.

As I'm getting over the vile flu like thing Gareth gave me the lymphocytes have all jumped off the metaphorical cliff like lemmings and now show where they would naturally have gotten to without last months 'infection fighting' spike.

The thyroid is behaving itself and being a good thyroid still (threatening it and depriving it of vast quantities of green vegetables seems to be doing the trick nicely.

My monocytes have been a little higher than required for the last 3 months, but that could be a before / during / after of the flu thing related I guess next month will be more telling.

It's been a bit of a faff, but it would appear getting my MRI booked in is actually happening now (allegedly in time for the results to be available for December 27th when I see the Neuro) - a little alarming that I got a phone call asking 'which sort of MRI' but then I do know which ones I've had in the past so I guess that makes sense.

I know I keep banging on about how important it is to 'know your MS and your treatment as well as if not better than your care providers' but that phone call meant that they didn't have to go hunting through a whole load of previous MRI's trying to work out what types they were and why they were done. Plus at least now I know they're doing the lot in one go.

Avid blood watchers will notice there's a new one appeared 'Serum Total Protein' - I have no idea what this is but it's now there for the next 2 1/2 years of vampiric activity so enjoy.

In the interim I await the MRI and Neuro, my plans are almost in place no matter what the outcome and it will all be good.

Keep kicking MS up the arse every day
Much love xx 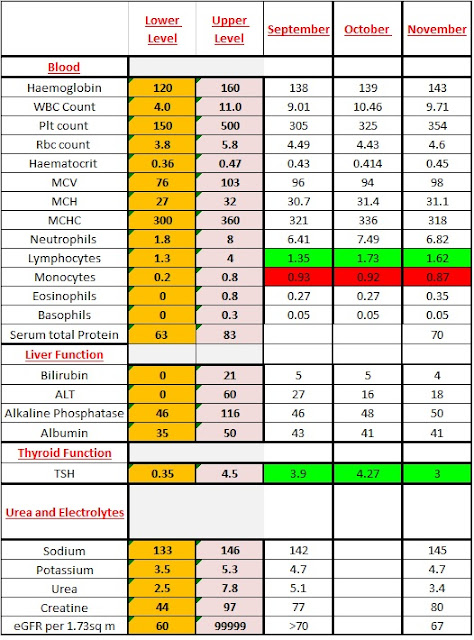